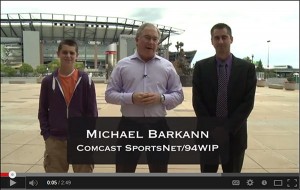 On Valentine’s Day the heart is front and foremost on people’s minds.  It is also a day where you remind your loved ones of how much they mean to you; but do you know what to do if a loved one’s heart stops working due to Sudden Cardiac Arrest (SCA)?  Simon’s Fund does.

To show the world just how easy it is to use an AED, which does not require experience or training, Simon’s Fund has created a fun and informative video called “Save a Life in an Instant-Gram Challenge”.

In this video Central Bucks South High School junior Jack Gallagher attempts to set up and use a HeartSine samaritan® PAD Trainer before Assistant Principal Todd Bauer opens an Instagram account on his smartphone.

Refereed by Philadelphia sports commentator Michael Barkann, the challenge demonstrates the simplicity of setting up and using a HeartSine AED.

“I am impressed with the creative way Simon’s Fund shows the ease of use of our AED,” says Stephen Garrett, Vice President of Sales and Marketing for HeartSine.  “We hope comparing the use of an AED to performing a task as simple as setting up an Instagram account will reduce the fear people have of using these devices.”

Watch the video and learn for yourself by visiting Simon’s Fund You Tube channel.

Simon’s Fund was instrumental in the passage of the first legislation in the country to protect student athletes from sudden cardiac arrest, Pennsylvania’s Sudden Cardiac Arrest Prevention Act.  Six other states have introduced similar legislation.

Since 2005, Simon’s Fund has screened more than 8,000 children’s hearts for conditions which cause sudden cardiac arrest, detecting conditions almost one percent of those children screened.  For more information, visit www.simonsfund.org.