HeartSine Technologies, one of the world’s leading manufacturers of personal and public access defibrillators, is providing 14 mobile Automated External Defibrillators (AEDs) to the Rugby League World Cup in a partnership which will ensure a life saving legacy to local communities where the teams were based during the competition. 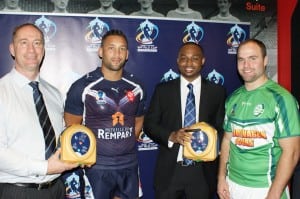 The company, which designs, develops and manufactures AEDs in Northern Ireland, is collaborating with the company’s distributor BOC Healthcare to provide the life saving samaritan® PAD devices to each of the 14 nations competing in the World Cup.

During the tournament, the defibrillators will be held by the medical teams of each competing country, and will then be presented to local schools and sports clubs where the teams were based across the United Kingdom and Ireland.

“While we hope that the defibrillators will not have to be used during any of the matches, we are all too aware that Sudden Cardiac Arrest (SCA) can happen to anyone at anytime, regardless of their fitness level or age,” said HeartSine Chief Executive, Declan O’Mahoney.

“It happened only last year to 23-year old football star Fabrice Muamba who collapsed during the FA Cup quarter-final, and was fortunate a HeartSine AED was on the field to assist in saving his life.”

“These rugby stars are coming from around the world to play at 21 different venues, over 35 days, so we wanted to ensure they are all protected by the presence of a portable defibrillator which can be easily transported from stadium to stadium.

“Thousands of spectators are also due at each of the venues over the next couple of weeks, so it’s essential a defibrillator is at hand as, unfortunately, on average 300 people die from SCA each day in the UK and Ireland combined. In fact, globally, over 20,000 people die from the condition on a daily basis.

“It’s fantastic to think that the defibrillators will then be passed on to local schools and sports clubs and that our local communities will be protected for generations to come.

“Many of the competing teams and travelling fans will be familiar with HeartSine as our devices are used in over 40 countries including Australia, New Zealand, USA, Italy and France.”

The tournament, which runs from 26 October to 30 November, will be hosted by England and Wales, with matches also held in Ireland and France.

Simon Perritt, Rugby League World Cup 2013 Chief Medical Officer, said:
“We are delighted with our partnership with HeartSine and BOC Healthcare and the fact that the defibrillators that are supplied to us will have a lasting legacy in local communities.”