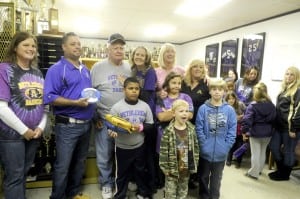 Lee Martin is giving back to the community that saved his life.

This fall, Martin stood on that same field alongside his family and the good Samaritans who helped save his life and donated a HeartSine AED to the Bethlehem Raiders Youth Organization.

“I wanted to do something special for the Raiders organization,” said Martin, who is admittedly a man of few words. His daughter, Leann Marakovits explained, “The members of the Raiders community who stepped forward to help were an integral part of his survival. Without their help and quick thinking, he would not be here to enjoy many more years of watching my daughter cheerlead. If it weren’t for the fact that my dad was in a public facility, with the right people there to perform CPR and they had an AED, he would not have survived.”

The Bethlehem Raiders, an all-volunteer youth organization, is the oldest youth organization in the City of Bethlehem, PA. “They begin football and cheerleading practice in August and games continue every Saturday and some Sundays through the end of October,” said Marakovits. “Their fields are filled with many people, children, parents, grandparents and great-grandparents, during the week for practice and on the weekends for games, and they do not have an AED.” The donated lightweight and portable AED will travel with the organization.

Martin’s life was saved thanks to “everyone being in the right place at the right time,” said Marakovits. Stacie Dancho, a nurse who administered CPR, almost didn’t come to the game and arrived just minutes before Martin was stricken.  Fred Harris, Liberty athletic director, called the ambulance and ran to grab an AED which he knew was located in the nearby Memorial Gym lobby.

Thanks to the efforts Dancho, Harris and countless others who offered help that fateful night as well as support to the family afterward, Martin is now enjoying watching his granddaughter cheer at this season’s football games. “I see everyone that helped – from the coaches that carried me out to the nurses and trainers – each weekend at the football game and they always ask how I’m doing,” said Martin. “The Raiders organization is a great group of people, a true community,” added Marakovits. “From the coaches to the concession stand workers everyone has been so caring, concerned and helpful. Throughout this whole ordeal over the last year, they’ve been there for everything we have needed. I love them.”

Because Martin and his family learned that AEDs can make the difference between life and death, they reached out to HeartSine to donate an AED. HeartSine was happy to help as part of their Forward Hearts program, which allows individuals who have survived a sudden cardiac arrest event to save another’s life by donating a HeartSine samaritan® PAD 300P Public Access Defibrillator to the charity or organization of their choice.

“AEDs save lives. If there hadn’t been one accessible, my dad wouldn’t be here,” said Marakovits.  “We’re so grateful it happened where it happened and near people who could help, and it feels great to give the Raiders organization equipment that could potentially save the life of someone else in our community.”